The Making of Union Time 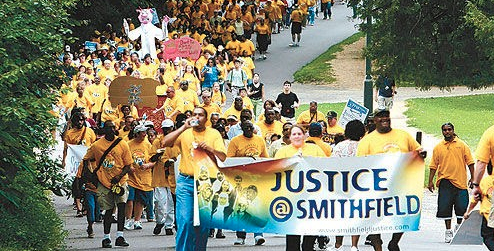 In decades of producing documentaries about working people and working communities, I have always wanted to make a film about a union. I hardly expected to find my subject in North Carolina, the state with the lowest rate of union membership in the country. Fortunately, a contact at the local Teamsters Union pointed me in the direction of the Smithfield Foods’ pork processing plant in Tar Heel, North Carolina.

Smithfield opened this plant in Tar Heel in 1992. From the beginning, conditions in the plant were harsh, with a high rate of accidents, repetitive stress injuries, and abusive behavior. In 1993, the United Food and Commercial Workers Union came to Tar Heel to try to organize the workers in the plant. The first two elections, in 1993 and 1997, were tainted by Smithfield’s illegal actions. By 2006, the National Labor Relations Board had found Smithfield guilty of multiple workplace violations, resulting in the company having to pay $1.1 million in back pay to unjustly fired workers.

In 2006, Gene Bruskin, a charismatic labor activist, was brought in to head up the Justice@Smithfield campaign. My wife Cornelia and I met Gene in spring 2007, and he agreed (with the approval of the top leadership at the UFCW) to let us film the union struggle as it evolved.

I shot my first footage in August 2007 on a bus of Tar Heel workers en route to a protest rally outside the Smithfield Foods’ shareholders meeting in Williamsburg, Virginia. At that rally and elsewhere, Justice@Smithfield became a prime example of social justice unionism. Organizations dedicated to social justice, including the AFL-CIO, Jobs with Justice, the United Church of Christ, Human Rights Watch, and the NC NAACP under the direction of the Reverend William Barber, came together to support workers, along with consumer groups who wanted Smithfield to stop producing meat “packaged with abuse.”

As a one-man band, between 2007 and 2015 I shot everything from demonstrations to debriefing meetings and home visits. I filmed organizers encouraging workers at midnight in the Smithfield parking lot, keeping an eye out for the company’s notorious private police force as they talked. And most of all, I interviewed workers who put aside fear and came together for a cause that could cost them their jobs, their immigration status, and their freedom.

The incredible courage of the Smithfield workers—Wanda Blue, Ronnie Simmons, Lidia Victoria, Keith Ludlum, Terry Slaughter,  Lorena Ramos, and so many others—carried me through the highs and lows of making the film. They are the heroes of Union Time.

Like so many documentaries this was a labor of love, a deep immersion into a culture and a cause. I shot more than 170 hours of footage for the film. I wrestled with the story arc, wavering between the journey to the successful election in 2008 and showing the work of a union local in advocating for workers’ rights on the job from 2009 on—what union organizers call “building the house.” I also wanted to put the story in the context of other justice struggles, from Moral Monday to the Occupy movement and the fight to raise the minimum wage.

To produce the film, the Unheard Voices Project received support from the Forsyth County Arts Council, the United Church of Christ Neighbors in Need program, and a number of progressive individuals, including my generous family. I was also fortunate in my capacity as a Media Studies professor at the University of North Carolina-Greensboro (UNCG) to receive grants and a research leave.

I want to give a big shout-out to the many people who helped in production and are responsible for Union Time’s success. Actor/activist Danny Glover narrates the film. Danny added a lot more than name recognition and his distinctive voice—he supported the Tar Heel workers for many years and provided us with moral support during production.

We were also supported by generous and talented producers, film editors, composer, and illustrator, whose names appear here.

Unions and a Way Forward

The Tar Heel victory in 2008 was a victory for working people—truly the greatest labor story never told. While it had some coverage in the media, getting the word out was hampered by the general public’s attitude that unions are corrupt, and the mainstream media’s pro-corporate stance. With the 2016 elections, working people’s dissatisfaction with the status quo is finally in the forefront. Will Congress and the president-elect actually create jobs and wage equity for struggling working class people? Time will tell. Maybe a more realistic outlook is that if workers unite and demand wage fairness, they will get results. In that, the Tar Heel workers and the UFCW provide an example that is as relevant today as it was in 2008.